Duke It Out: Canvas Artistry

ALBUQUERQUE (KASA) – We are in the kitchen with Chef Saul Paniagua from Canvas Artistry on behalf of Duke It Out and Builder’s Source Kitchen to benefit El Ranchito de los Ninos. Today he is making a delicious meal with spam, and giving us the details on Duke it Out and how you can attend.

ALBUQUERQUE (KASA) – We are in the kitchen with Chef Saul Paniagua from Canvas Artistry on behalf of the Duke It Out Challenge with Builders Source Appliances to benefit El Ranchito de los Ninos.

We went to Canvas Artistry after visiting Matanza last week (which I’ll happily discuss just as soon as I’ve had a sampling of the food). Hip new restaurants and bars are flooding the Nob Hill landscape as of late, and seeing as Elliott and I hadn’t wandered down Central in a couple of months, we played the tourist role by stopping in these newer locations. Canvas came at the recommendation of a couple of friends whose explanation pretty much consisted of, “It’s new.” and “They print their menus on canvas.” Apparently that’s all we need to entice us, so off we went.

Canvas Artistry is a novel sort of place. It takes the art concept beyond what other local establishments boast and runs away with it. Not to disappoint, the menus are printed on canvas. The menu items focus on creative ingredients and spices. The food is considered to be a part of the experience at Canvas, rather than an afterthought for the tipsy crowds that grace Nob Hill’s after-hours streets.

Meanwhile, local artists’ work dots the walls, featuring coyotes and candy skulls and sunset scenes. This is a bit like some other restaurants in town – O’Niell’s comes to mind – but the feel really does mimic a gallery. The floors are concrete under color block walls. It’s all very modern and urban and a touch industrial. The art is the focus, and the food is just another form of the artistic vision.

To satisfy our tastebuds, we ordered the Blue Corn Beer Battered Fish Tacos, which we gathered were a point of pride considering the sandwich sign outside proudly touted tacos within, and the Porcini Crusted Beef Skewers. Both were delicious. Everything about the tacos was sweet, from the fish, which was mahi-mahi, to the jicama slaw, to the corn batter. The jicama slaw added a creaminess that was welcome alongside the soft corn crust on the fish. Between passive aggressively offering the third taco to one another, we nibbled on the comparatively spicy beef skewers. The skewers were well done and just as well spiced. A touch of heat went well with the onion jam. They coupled nicely with the subtle flavors and sweetness of the tacos.

We were glad that we didn’t order more. The food at Canvas, I dare say, is meant for enjoyment rather than shoveling down one’s gullet. It was heavy and flavorful. We were satisfied after even those small portions.

All in all, I’d recommend Canvas Artistry the next time you’re in Nob Hill. If you want to know more about it, the website is still a work in progress, but Canvas has a fairly active Facebook page that you may want to check out. And if you’re interested in a more in-depth look at the food offerings, Gil’s Thrilling (and Filling) Blog just reviewed Canvas, too. 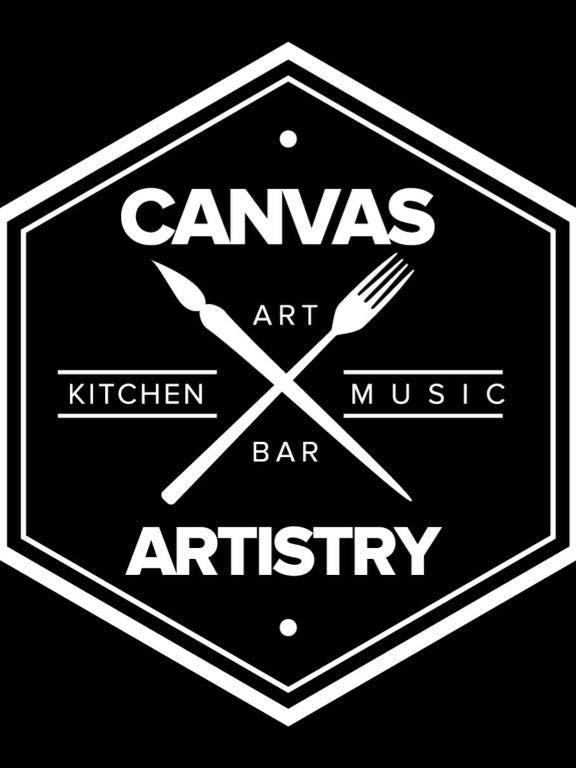 It’s a restaurant where it makes sense that menus are printed on canvas.

Canvas Artistry, a restaurant and art bar, has opened at 3120 Central SE, next door to B2B Bistronomy.

The restaurant, which features a street-food-inspired menu and rotating artworks by local artists, fills the remaining half of the old Vivace space and provides another lunch and dinner option in Nob Hill.

Pork belly and shrimp corn dogs, a lineup of tacos and yogurt chicken bahn mi are some of the items chef and partner Saul Paniagua is offering on the menu — which is printed on canvas stretched over a wood frame, in keeping with the restaurant name. Canvas Artistry also carries a full liquor license.

Canvas Artistry, a restaurant and art bar, opened at 3120 Central SE, taking over what remained of the former Vivace in Nob Hill. The menu — printed on small, wood-framed canvas boards — has a street food bent. Chef and partner Saul Paniagua spent years working on a cruise ship and said he’s drawn on various cuisines from all over the world. The menu will change periodically, but the current incarnation includes the aforementioned pork belly and shrimp corn dogs, yogurt chicken bahn mi and a variety of tacos. Canvas Artistry also carries a full liquor license. The space itself will serve as a rotating showcase of local artists. Co-owner Jesus Gomez said the current lineup of artists was chosen with Dia de Los Muertos — the Nov. 1 holiday — in mind, though the displays will change. Canvas Artistry is open 4 p.m.-2 a.m. Tuesday through Thursday, noon-2 a.m. Friday and Saturday and noon-midnight on Sunday.

Here you can create the content that will be used within the module.

Do you like your dinner with a side of art?A new restaurant and bar plans to bring the two together in Nob Hill. The venture — called Canvas Artistry — will fill a long-standing vacancy at 3120 Central SE, taking over what’s left of the old Vivace space.Co-owner Jesus Gomez said the new place will focus on international street food — a general style that might encompass anything from tacos to fideo, he said — and, with a full liquor license, will emphasize creativity in its cocktails.Gomez said art will play a key role in the venue, with the 80-seat space showcasing a rotating array of artwork in a range of mediums.“We just want to expose (guests) to different art forms in a different setting and I think people will appreciate it a little more because of the ambiance and setting,” said Gomez, a first-time restaurant owner who has a background in hospitality.

Canvas Artistry moves into the eastern section of the old Vivace in the heart of Nob Hill. (Bistronomy B2B took over the western part a few years ago.) The space, empty since 2012, was originally plotted as a new location for Chez Bob, but owner Bob Maw called off that plan last year.

Renovation work has begun at the site, and Gomez said he is aiming for a summer launch.

Nob Hill’s roster of restaurants will grow this summer when a new 80-seat, street-food-style eatery opens in the space next to Bistronomy B2B, according to a report in the Albuquerque Journal.

The restaurant will be called Canvas Artistry and will be located at 3120 Central SE, filling out the old Vivace space. Renovation work has begun at the site.

Co-owner Jesus Gomez said the menu at Canvas Artistry will include everything from tacos to fideo. The restaurant will also feature a full liquor license and an emphasis on creative cocktails. And as the name suggests, art will take center stage, with a rotating array of artwork in a range of mediums.